Lest We Forget the Vultures


The value of nature and why we don’t appreciate it until it’s (almost) too late.

In 1993 there were 40 million vultures in India. Fourteen years later, the long-billed vulture had declined by 97% — worse still the oriental white backed vulture became virtually extinct at a loss of 99.9%.

It’s a tragic story, not only for the plight of a much maligned bird of prey but also for the communities that they co-existed with.

During these fourteen years, an inflammatory drug, diclofenac, emerged as a winner with vets and farmers. Sick farm animals recovered but the drug remained active in their bodies even when they did eventually died.

Vultures feed on carrion (dead meat). But as the saying goes, one man’s meat is another man’s poison. The revitalising effect of diclofenac was a death call to the vulture.

One dead cow doesn’t equate to one dead vulture.

It was not an arithmetic strike. A large cow carrion feeds a ‘committee’ of vultures. The losses were exponential.

Furthermore it had unimaginable consequences for the people and their communities across India.

Tony Juniper, in his book What Has Nature Ever Done For Us? describes the cascading effect of losses in India. Rotting carcasses, normally cleaned up by the avian scavengers, were now a breeding ground for bacteria, including anthrax which threatens humans.

Throughout the early 1990s it’s estimated an excess of 12 million tonnes of meat was taken up by a thriving wild dog population. This surge in numbers, of about 7 million, was a result of the dying vulture community. The dogs carried a whole host of diseases including rabies.

Professor Anil Markandya, environmental economist and Director of Basque Centre for Climate Change was approached by the RSPB to conduct an analysis of this impact on society in India.

“People didn’t realise that these scavengers played such a crucial role in society.”

Prof Markandya’s research, Counting the cost of vulture declines, was published in Ecological Economics in 2013.

“It got a lot of attention, people responded and it had some impact on the Indian government’s decision to phase out the use of diclofenac.”

The estimated cost to India’s economy was $34 billion.

Most of this was health care but it also included the loss of livelihoods, particularly for the poorest communities who were most exposed to dog bites and whose cottage industries of clean bone collection were directly affected by the scavenging services of the vultures.

Counting the dead, whether it’s bees, birds, people or vegetation such as trees is the clearest measure of consequences when nature is tipped out of balance. Today quantifying nature’s services/losses, in terms of economic value, has become a more standard and, for some, accepted method of analysis.

There are strong arguments that environmental economic evaluation is limited — based on the assumption that nothing has value unless it benefits humans in some way. The fact that nature holds an intrinsic value is ignored and that is morally wrong and counterproductive.

“I am kind of sensitive about this; people will suggest that the whole value is not being counted, or even considered. I do accept that — but if you are going to put pressure on companies that produce such a drug you have to demonstrate that not only is it detrimental to a particular species but it also has certain negative economic impacts which are important from a policy point of view. So even though it is a partial analysis it is an important one.”

In a recent report by University of Cambridge Institute for Sustainability Leadership (CISL 2020) Biodiversity and Land Degradation An Overview of the Financial Materiality, the opening words are:

44 trillion US dollars of economic value generated each year is moderately or highly dependent on nature. This is more than 50 percent of global GDP.

Biodiversity, put simply, is “the variety of life on earth” . Without it, nature cannot provide the goods and services that are worth trillions. It is indispensable for food security, disease prevention, clean water provision and so much more.

Yet biodiversity is experiencing a precipitous decline. One million species are threatened with extinction.

As a result, World Economic Forum ranks biodiversity losses the third most impactful risk facing the global economy, and the fourth most likely to occur

These stark statements are an alarming wake up call to the scale of environmental challenges ahead and a strong motivator for change. Whilst such large figures do not represent all aspects of nature’s value, policy makers, businesses and financial institutions seem to be responding.

Have we learned from past events?

In 2013, nine years after published evidence of the toxicity of diclofenac in vultures, the veterinary use of the same drug was approved in Spain and Italy. Vulture numbers across Europe have been declining — for many reasons — the Old World Vultures are on the International Union for Conservation of Nature’s (IUCN) Red List of Threatened Species. 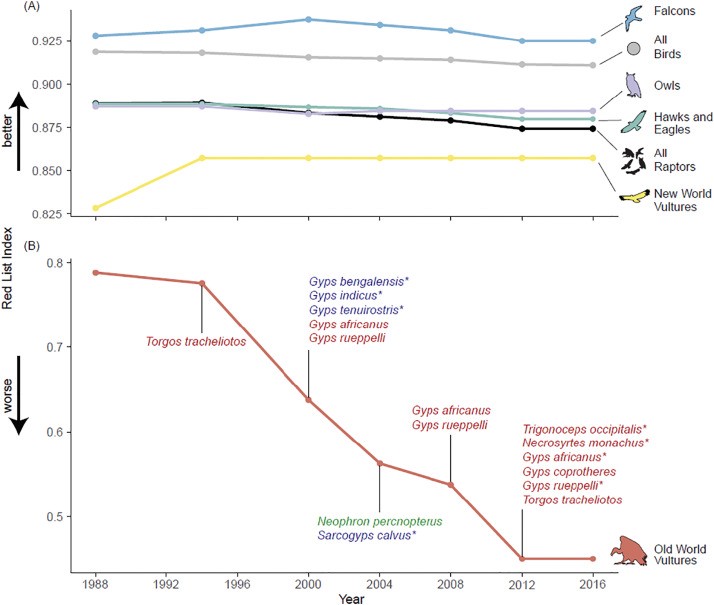 So why did this drug fall through the net in Europe, after everything that transpired in India?

The impacts, documented and made public — the evidence, analysed and reviewed- new policy, successfully executed, and more significantly, given the dwindling populations of vultures across the continent of Europe.

Professor Markandya in his quiet and candid way nodded knowingly as this question was posed to him, as if he had possibly been asked many times before.

“It’s a good question. Of course there is concern in Europe because they are also losing vultures populations here.”

Perhaps there was less risk from rabid dogs? Or that collaboration between local communities, conservationists, researchers, economists and policy makers hadn’t yet reached a critical mass?

It was this combined flashpoint that brought policy change in India.

As a Royal Society paper (2014) on India’s vultures concludes :

While the impact of the veterinary use of diclofenac on vultures has occurred at a speed and scale that is unprecedented, the results of this paper demonstrate that conservation efforts linking research, advocacy and government actions have had a major influence on human behaviour and may have begun to allow vulture populations to recover.

The impacts of diclofenac on vultures in the Indian sub-continent show that careful evaluation of the impacts of pharmaceuticals in the environment is needed and also provide hope that seemingly lost causes can be recovered by concerted conservation initiatives.

So let us not forget the vultures.

Today a gradual rewilding is taking place across the Asian subcontinent. A wrong has been partially righted at least somewhere in the world.

The loss of vultures in India has become yet another parable of how we (humans) disturb the order of nature to benefit short term needs without comprehending the longer term, far reaching, consequences until it’s (almost) too late.

This is a reminder that however much ‘putting a price tag’ on nature is questioned, it has its place, and can be a powerful tool in initiating top down change — but more crucially, that every single one of us has a unique and essential part to play in caring for the welfare of our planet and all that live here.

← Prev: Long term career success? It begins with sport, and it’s not too late to take action.

We’re building a framework that drives global transformation and restores our world’s natural capital. Please get in touch to find out more about us, our investment loop and NGO partners

STAY IN THE LOOP

stay in the loop

Find out more about what we do and sign up today.

This website uses cookies to improve your experience while you navigate through the website. Out of these cookies, the cookies that are categorized as necessary are stored on your browser as they are essential for the working of basic functionalities of the website. We also use third-party cookies that help us analyze and understand how you use this website. These cookies will be stored in your browser only with your consent. You also have the option to opt-out of these cookies. But opting out of some of these cookies may have an effect on your browsing experience.
Necessary Always Enabled
Necessary cookies are absolutely essential for the website to function properly. This category only includes cookies that ensures basic functionalities and security features of the website. These cookies do not store any personal information.
Non-necessary
Any cookies that may not be particularly necessary for the website to function and is used specifically to collect user personal data via analytics, ads, other embedded contents are termed as non-necessary cookies. It is mandatory to procure user consent prior to running these cookies on your website.
SAVE & ACCEPT
Share This